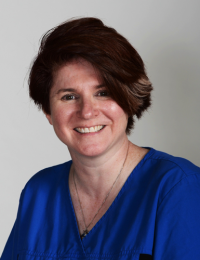 Gaelin was born and raised in the town of Weston, Ontario. Since childhood, Gaelin wanted to work with animals. An avid rider and dog sport enthusiast Gaelin spent many years both in the saddle and handling a dog leash.

Intrigued by large animals, Gaelin did her Honours Bachelor of Science in Agriculture at the University of Guelph, specializing in Dairy Cattle and Equine Breeding. After graduation, Gaelin worked with embryo transfer in cattle, had a brief stint in the food industry and spent some time as a dog trainer, training everything from the family pet to search dogs. While working, Gaelin pursued a degree in Adult Education and Rural Extension. Having decided to return to university to become a veterinarian, Gaelin finished her Arts degree during her first year of Veterinary Medicine.

Getting married just before the beginning of veterinary school, Gaelin and Larry had their first daughter during Gaelin’s second year of vet school. Graduating from the Ontario Veterinary College in 1999, the O’Gradys moved to Smiths Falls and bought one of the family farms.

Gaelin spent the first year after graduation working as a locum veterinarian. In 2001, Gaelin became a partner in Smiths Falls and Merrickville Veterinary Services where she remained until 2009. During this time Larry and Gaelin’s second daughter was born.

Gaelin has a special interest in preventative medicine through proper nutrition, weight control and dental care. The practice promotes wellness testing to help with early disease detection thus enhancing the health and happiness of her patients. Gaelin believes that animals should not be allowed to suffer needlessly and stresses pain management and nutritional aids to help relieve the pain of our beloved pets. The practice believes in both preventative and pallative care; keeping senior pets and those with chronic health problems as happy and pain free as possible so that both the pet  and their owners can enjoy life.

An avid learner, Gaelin and her staff attend continuing education courses/conferences on a regular basis. Recently, Gaelin completed a course in Stem Cell techniques, which can be extremely beneficial in treating aliments such as chronic pain and mobility issues. Gaelin looks forward to introducing these services to her patients.